The Society holds an annual confere 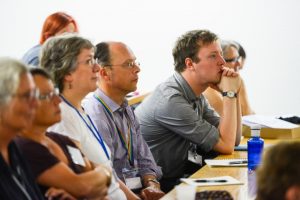 nce over one or two days at various locations around the UK (and occasionally abroad), usually at academic venues.

2021 (online): “Boosting your indexing business”, 9-10 November. Through a mixture of talks, demonstrations and break-out sessions we hope to have something of interest for everyone, from indexing students and newly qualified indexers to those who have been members for many years. The outline draft programme can be found here.

Our 2019 conference was held at the Mile End campus of Queen Mary University of London. An initial summary of the conference from social media is available on Wakelet. Reports on conference sessions are available in the members’ area of this website.

The 2018 conference was held at Lancaster University, in parallel with the SfEP (CIEP), to facilitate networking between members of  the two societies., with SI President Sam Leith as the after-dinner speaker. Reports on conference sessions are available in the members’ area of this website.  A Wakelet record of the conference, as recorded on Twitter, is here.

The Society celebrated its 60th anniversary with a memorable one-day conference and gala dinner at St Anne’s College, Oxford, on Wednesday 21 June 2017 – the longest (and hottest) day of the year.  This was immediately prior to the two-day symposium on the book index at the Bodleian Library, giving delegates a three-day feast of indexing at a very modest price. Reports on conference sessions and presenters’ handouts are available in the members’ area of this website.

A one-day conference and AGM was held at The Studio, Birmingham on Tuesday 13 September 2016. Delegates travelling to Birmingham the previous day stayed in nearby hotels and met up on the Monday evening. Conference reports and lecture slides are available in the members’ area of the website.

The first SfEP/SI joint conference was held at Derwent College, York University, on 5-7 September 2015, providing an excellent opportunity for our large community of copy-editors, indexers and proofreaders to develop their professional knowledge, network and socialise, alongside international delegates from both societies.

2010: Middelburg: “The challenging future of indexing”

The first non-UK conference since 1997 took place from 29 September to 1 October 2010 at the Roosevelt Academy, University College, Middelburg, The Netherlands

2008: Winchester: “The round table conference”

The Society celebrated its golden anniversary with a three-day conference from 13 to 16 July 2007 at Whitelands College, Roehampton University