The Scottish Group was the first of the Society’s Local Groups to be formed, in 1986, by Anne McCarthy and Moyra Forrest. It formed the model for other Groups. Our membership of about 60 is spread out over the whole of Scotland (30,400 square miles), including members in the Western Isles and Shetland. We generally meet twice a year, in April/May and September/October, usually for an afternoon. Anyone visiting Scotland is very welcome to join our meetings.

The Scottish Group runs a discussion forum that is open to members of the Society.

Information will be posted here in due course once the lockdown restrictions have been lifted. In the meantime, keep in touch with other indexers via SIdeline and the group forums. Don’t forget you can participate in discussions on any of the local group forums.

This was held as a virtual meeting, due to the Covid-19 situation.

Eight members of the Scottish group met in Glasgow in early November, and were welcomed to the Moving Image Archive by Sheena MacDougall, Learning and Outreach Officer. Sheena gave us a tour of their facility, which includes a Discovery Area exploring the history of cinematography and cine-going in Scotland, as well as interactive touch screens displaying themed footage. The Archive is part of the National Library of Scotland and it acquires, preserves and stores footage by and about the people of Scotland, alongside an ambitious digitisation programme which aims to have one-third of the collection digitised by 2025. Curators Ann Cameron and Liam Paterson showed us the catalogue, and discussed the challenges of accurately cataloguing material which has often being stored in family homes for many years. The Moving Image Archive follows guidance by the International Federation of Film Archives and in-house, uses the Sears List of Subject Headings. Following this visit we had lunch at a neighbouring tapas restaurant where the discussion covered indexing software, embedded indexing and a chat about the 2019 conference where those who had been able to attend shared their experiences with those who had not.

“How any one can take indexing up as a calling passes my imagination.” 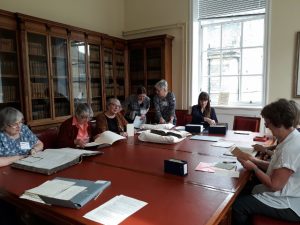 The Scottish group thoroughly enjoyed their visit to the John Murray Archive at the National Library of Scotland in Edinburgh. Curator Kirsty McHugh and Digital Archivist Steve Rigden very generously gave their time for presentations about the history of the collection, its current state and the challenges involved in cataloguing and indexing such a vast body of material. The John Murray archive – which takes up over seventy linear metres – is unusual in that it provides a very full archive of the business, as well as a record of author-publisher relations through correspondence. Of particular interest to the group were bound, marked-up proofs of 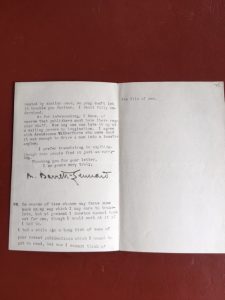 Lord Byron’s poetry, a letter from Charles Darwin to his publishers before the publication of Origin of Species, plus some ledger entries and correspondence relating to the commission of indexers. We also pored over a charming little typewritten volume known as ‘Dr Rae’s Rules’, indexing conventions used by the NLS from the 1920s until the 1980s and still used for reference today. Many of the decisions about name indexing were very familiar!

We also had a look around the current NLS exhibitions which as luck would have it, included more material from the archive in “Such seductive poetry: Byron’s Don Juan”. Then it was lunch at Howie’s in Victoria Street where we enjoyed a delicious meal and made a presentation to Linda Clark in recognition of her time as the Scottish group coordinator, from which she is now stepping down.

We would like to document our thanks here too: Linda has organised some wonderful and memorable SI Scottish group events over the years, and there are a number of current students in the Scottish group who are immensely grateful to Linda and to other longer-standing group members for their warm welcome and ongoing support. We look forward to our autumn meeting which is likely to be in Glasgow in October.

The group booked a room at the University of Strathclyde for this meeting, which was a training/CPD meeting. We started with a presentation on the development of the training course. This was delivered by Linda Clark, the outgoing organiser, with thanks to Jan Worrall, who provided much of the material. This generated a lively discussion, as the students attending ranged from Module A through to D on the training course. This wide span of indexing practice and experience gave a broad view.

Next came a conference report from Moyra Forrest, supplemented by Lyndsay Marshall, whose conference report you may have seen in SIdelights. We broke for coffee after this, then returned for a peer review. Everyone had made a good effort at indexing the text, a pamphlet called Tracing the History of your House, a big ask for the students just starting on Module A of the training course. Again, the discussion was lively, with substantial contributions from all attendees, often reflecting on issues from the course tests. We finished at lunchtime, and adjourned to a local restaurant for a well-earned lunch.

Following the meeting, I am delighted to announce that Fiona Firth, one of the students, has volunteered to step into the role of organiser while she completes the training course. It is envisaged that there will be a staged handover, with Fiona increasingly taking on the administration and organisation. She does not feel ready to take over the full role just yet, so I will continue as caretaker while she gets up to speed. I am sure the Scottish group will offer Fiona the same support that it has shown me and I think that we can all be very pleased that the continuation of the SI Scottish group is assured for some time to come.

The Scottish Group convened its spring meeting on Thursday 22 March at the remarkable building of the National Portrait Gallery in Edinburgh. Members were given the grand tour of the gallery which has the most beautiful and evocative murals, art works, paintings, sculptures and photographs on display. Becky Howell, the librarian, gave an excellent introduction to the research, collection and public libraries based there. She spoke in detail about the in-house process of digitisation currently being carried out. She also gave a fascinating account of how the libraries were organised, including the bespoke classification system used by the library.